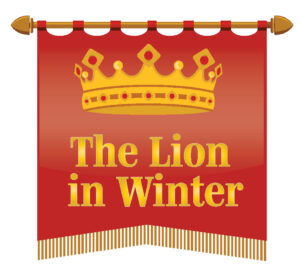 About the Play: Betrayal, treachery, and a knife fight: it’s just another normal Christmas celebration for the royal Plantagenet family of Britain. In The Lion in Winter, King Henry II throws a Christmas feast for the newly crowned King of France. Also in attendance for the holiday celebrations are Henry’s three plotting sons, each eager to take the throne, and Henry’s manipulative wife Eleanor of Aquitaine, newly released from house arrest (after raising an army against Henry). Even though they need to appear a happy family for the King of France, this doesn’t stop each Plantagenet from secretly plotting to take the others down. While the three sons backstab and squabble to take their place in history, Eleanor and Henry use their offspring as pawns against each other in a dangerous game of cat and mouse. Told in “marvelously articulate language, with humor that bristles and burns (“Los Angeles Times”)”, The Lion in Winter is a play that transcends the historical genre to become a bitingly hilarious family drama.

King Henry II The king of England, Henry is the husband of Eleanor of Aquitaine and the father of Richard, Geoffrey, and John. He also has taken Alais Capet as his mistress. In his fifties, Henry is nearing the years when most men of that age died; however, he still has remarkable vigor and wit, as well as physical prowess. His clear favorite for his successor is his son, John, but his main desire is to keep his kingdom together after his death.

Eleanor of Aquitaine The wife of Henry II and mother of Richard, Geoffrey, and John, Eleanor is a strong and powerful woman in her own right. She is still beautiful and still in many ways in love with her husband, although he keeps her in prison most of the time. She is a danger to Henry because of her strength and intelligence; and she champions the fight for Richard to be the next king.

Philip Capet The king of France, Philip is also the brother of Alais. He is young, but has already become a strong monarch, although no match for Henry. His desire is to marry Alais to Richard and have Richard crowned king, thus cementing a relationship between the two countries.

Alais Capet The sister of Philip Capet, Alais is of the royal blood of France and would thus, through a contracted marriage with Richard, ally the two strong countries of France and England. She was raised as a child by Eleanor, and is the mistress of Henry. She is no less a pawn in the machinations of Henry and Eleanor than are their sons.

Richard The oldest of the three sons of Henry and Eleanor, Richard in later life becomes known as Richard the Lion Heart. He is his mother’s choice for the next king and is probably the best warrior of the three sons.

John The youngest of the three sons of Henry and Eleanor, John is described as pimply and an immature boy. He is, however, his father’s choice for the crown, and he uses this knowledge in taunting his two brothers.

Geoffrey The middle son of Henry and Eleanor, Geoffrey has no one fighting for his right to any throne, and he usually accepts his fate, but his does rankle him that he usually is not considered—in any matters of the heart or family. He is described as the most cerebral of the three boys.

Please prepare a dramatic monologue in the style of the production. It does not have to be memorized but should be prepared.  Please be prepared to stay and read a side with another actor within your timeslot.  We welcome auditioners 18 and up.

Auditions are located in the Palace Playhouse, on the Playhouse Stage 216 W. 8th street Georgetown TX 78626.

Auditions are scheduled online via the Palace website. You will fill out the audition form, sign up for a time, and fill out the conflict calendar, as well as upload a headshot and resume. Questions should be emailed to productions@georgetownpalace.com

You will receive an email confirming your appointment. If you are unable to attend any of the audition times, please send us an email and we will try to work with you to schedule an alternative time.

Rehearsals will begin on/around August 30th. We will distribute scripts the week after auditions.

Rehearsals are typically held Monday through Thursday from 7:00-10:00 pm and Saturday 1:00-5:00 pm. Performances are Friday and Saturday at 7:30 pm, and Sundays at 2 pm. Sometimes ticket demand causes us to add Saturday Matinee performances at 2 pm.  Two Saturday rehearsals will be moved to an alternate date/time TBD, predicated on the conflict calendar.

The Georgetown Palace Theatre is a 501c3 non-profit organization. There is no compensation for any of the actors.

The Georgetown Palace Theatre is committed to creating an inclusive and safe environment in which all community members feel a sense of belonging and does not discriminate in casting practices on the basis of an individual’s ethnicity, age, gender, physical and cognitive ability, sexual orientation, gender identity, religion, country of origin, or other factors.