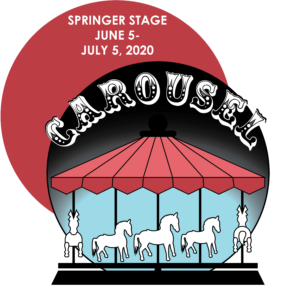 The Georgetown Palace will hold auditions for our production of Carousel

The production will open Friday, June 5th and close on Sunday, July 5th.

“Richard Rodgers once said that of all the musicals he wrote, Carousel was his personal favorite. This American classic was Rodgers and Hammerstein’s second collaboration and features some of their most memorable music, including “If I Loved You”, “Mister Snow”, “June is Bustin’ Out All Over” and the uplifting anthem “You’ll Never Walk Alone.” Carousel tells the story of roguish carnival barker Billy Bigelow and thoughtful millworker Julie Jordan, both loners, who meet and impetuously fall in love. Their marriage ends up costing both their jobs, and they question their own inter-dependence. Billy’s depression makes him violent against those he loves most, and desperation drives him to commit crimes in order to provide for his family. Julie also struggles to define her role in a community dominated by unearned bravado and a society that seems to have overlooked her.  Billy falls in with con-man Jigger Craigin, and, caught in the midst of an armed robbery, he takes his own life – leaving Julie to raise their unborn child, Louise, alone. However, in a stroke of heavenly magic, Billy is allowed to return to earth for one day, fifteen years later, to encounter the daughter he never knew. He is shocked to find Louise a lonely, angry teenager, her father’s reputation and absence having haunted her since childhood. Unable to escape his own past, Billy fails to connect with his daughter even after death but before all hope is lost, Julie comes to terms with her own troubled memories. The strength of forgiveness between mother and daughter, and the power of a unified community of women, casts a small ray of hope for Billy’s own eternal salvation. Voted the best musical of the 20th century by Time Magazine, Rodgers and Hammerstein’s Carousel spans heaven and earth in its exploration of human frailty, resilience, and the power of forgiveness.”

We will be casting 24-30 awesome people for principles and featured performers/ensemble.  We will be casting ages 13 and up. This timeless musical is one for the whole family, we hope that families consider auditioning together.  Louise and the snow children (in the ballet) will be considered at ages 13 and above.

Auditions will be held Saturday, March 21st thru Tuesday, March 24th. Singing auditions Saturday and Sunday, Dance on Monday, Callbacks (invitation only) on Tuesday from 7:00-10:00 pm. Callbacks are posted on the Palace website.

Initial Audition: We ask that everyone prepare one of the selected vocal sides from Carousel. Feel free to choose the music that fits the character you’d like to be considered for, or the music  that you feel most comfortable singing. OPTIONAL: In addition to the vocal selection, you may also bring a short monologue of your choice (under one minute.) Monologues are not required and do not need to be memorized, so if you have something awesome bring whatever you think will help you rock the audition!

Dancer Audition:  You must attend the dance audition to be considered for any role in the production.  Please bring character shoes, jazz/sneakers are okay.  Dance auditions are Monday, March 23rd, 7:00-8:20 pm for Saturday auditioners 8:30 to 10 for Sunday auditioners.

Auditions are located in the Palace Theatre, on the Springer Stage 810 S. Austin Ave Georgetown TX 78626.

Callbacks will be by invitation only and held Tuesday, March 23rd, starting at 6:30 pm.  Callbacks are posted on the palace website, not via email.

Auditions are scheduled online via the Palace website. You will fill out the audition form, sign up for a time, and fill out the conflict calendar, as well as upload a headshot and resume. Questions should be emailed to productions@georgetownpalace.com

You will receive an email confirming your appointment. If you are unable to attend any of the audition times, please send productions@georgetownpalace.com an email and we will try to work with you to schedule an alternative time.

Rehearsals will begin around April 14th. We will distribute scripts and music the week after auditions.

Rehearsals are typically held Monday through Thursday from 7:00-10:00 pm and Saturday 1:00-5:00 pm. Performances are Friday and Saturdays at 7:30 pm, and Sundays at 2 pm. Sometimes ticket demand causes us to add Saturday Matinee performances at 2 pm.

The Georgetown Palace Theatre is 501c3 Non-profit organization. There is no compensation for any of the actors.

We practice non-traditional casting, and all roles are open. All ages, abilities, gender, and ethnicities are encouraged to participate.